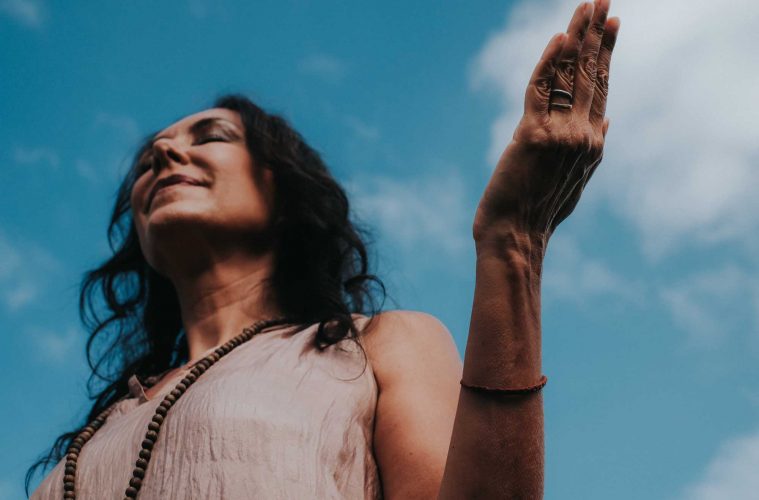 Walk Away From Everything That No Longer Grows You – Watch on YouTube:

It’s not easy to hit rock bottom, it hurts. It’s humiliating… the pain, the darkness, the loneliness.

It’s even worse when you’ve fallen from the peak of the mountain. That’s what happened to me.

I remember the day I hit rock-bottom. It was Christmas Eve and I was alone. I had nobody to go home to, no friends by my side. Nobody to celebrate what should have been a joyous time of the year.

As I walked through the street of Bologna by myself, all I saw around me was happiness. Happy couples, smiling families, laughing children. Witnessing the joy of others, when my own heart was enveloped in a sea of loneliness, pierced my soul.

It was as if the cold winter wind had pierced into my heart to remind me that my life was void of warmth, void of joy, void of light.

I used to live the kind of glamorous life many people would envy. I was an international supermodel walking the catwalks of Milan, Paris, Madrid. I was married to a dashing man who was also a model. I owned three companies and lived in a beautiful home. I had the life, dreams were made of.

But despite having all of that, I was depressed. I felt like my life had no meaning. And that’s why one day I just decided to leave everything. I left my marriage, I left the house to my ex-husband. I also left my three companies without taking any money or shares.

On top of that, all my friends abandoned me because they thought I had gone crazy. Nobody could see how unhappy I really was. Nobody could see the dream I wanted for myself. Because to everybody else, I was already living the dream. And I should already be happy.

So, when I walked away from that life, nobody supported me. The only thing I had was the determination to build a whole new life. A life I could be proud of. A life that would hold more meaning than an empty glamorous shell.

But the path was not easy. I was not equipped with tools to navigate the sudden changes in my life. My attempts to run workshops as a motivational coach were not doing very well. I was struggling to get students. And my savings were dwindling down fast. That’s why on that winter of Christmas Eve, on the streets of Bologna, Italy, I hit rock-bottom.

As I sat alone in my small apartment at night, I began questioning my decisions. Had I really gone crazy? Did I really throw away everything good in my life? Have I become a total failure? Am I going to make it on my own? Or should I just give up? Has God abandoned me, too?

But as the saying goes, when you’ve reached rock-bottom, the only way is up. And thankfully, at that moment, I decided to look up. I decided to rise up from rock-bottom. I shifted my view.

I began to see the process I was going through. Not as a depression but as a spectacular turning point. I started seeing the wounds in my heart as cracks that were letting in new light. A light that had been previously shut out from my life.

I realized, that though I had fallen, I had actually fallen into the hands of God. Because there’s no other place you can fall. And there, I felt deeply connected to spirit. And in that moment, I knew that, yes, I can rise up. I was determined to give my dreams another chance.

I committed to examine my own belief system and my fears. I diligently practiced meditation and paid more attention to the words I use. And became more aware to the meaning I gave the events in my life.

Through this process, just as a butterfly emerges from a dark cocoon, I, too, entered a beautiful new phase of my life. It was a whole new life where I truly had my own wings to fly.

I was no longer simply standing on a mountain-top that others envied. That was meaningless to me. I was now actually creating the difference my soul was born to do. After stepping into my authentic self and true purpose, things began to shift.

The most beautiful part of my journey, is realizing how being at rock-bottom was probably the best thing that happened to me. Because rock-bottom will teach you lessons that mountain-tops never will. Rock-bottom will show you how strong you really are. Rock-bottom is the foundation for you to rise up and create a whole new life.