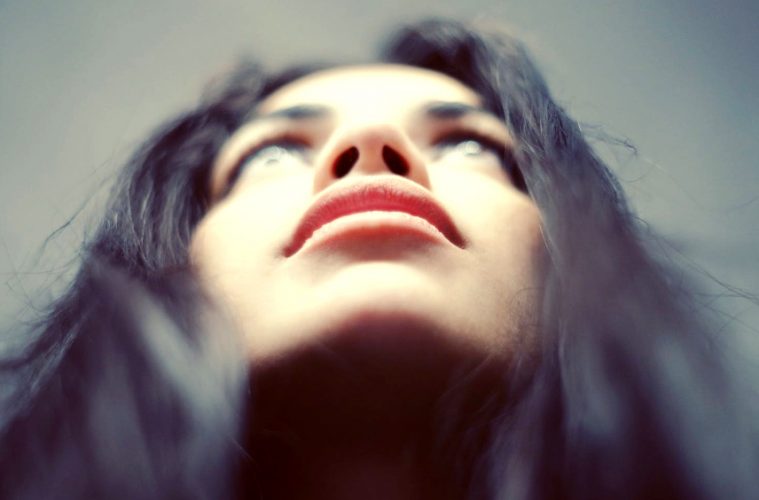 Moving From Within: The Art of Manifesting Inspired Action To Achieve Your Dreams

Beliefs, dreams, and desires, what do they do? How can one discover them? Personally, I believe a person can gain whatever he or she wants by taking action from within, or “Moving from within.”

Moving from within is the act of following your passion with no restrictions.

Those who move from within have a sense of freedom about them that attracts limitless positivity and success to their lives.

Even if they face obstacles on their journey, their abilities to move from within allows them to overcome those obstacles and keep on progressing.

There are many components to moving from within.

Let me explain a couple of them: 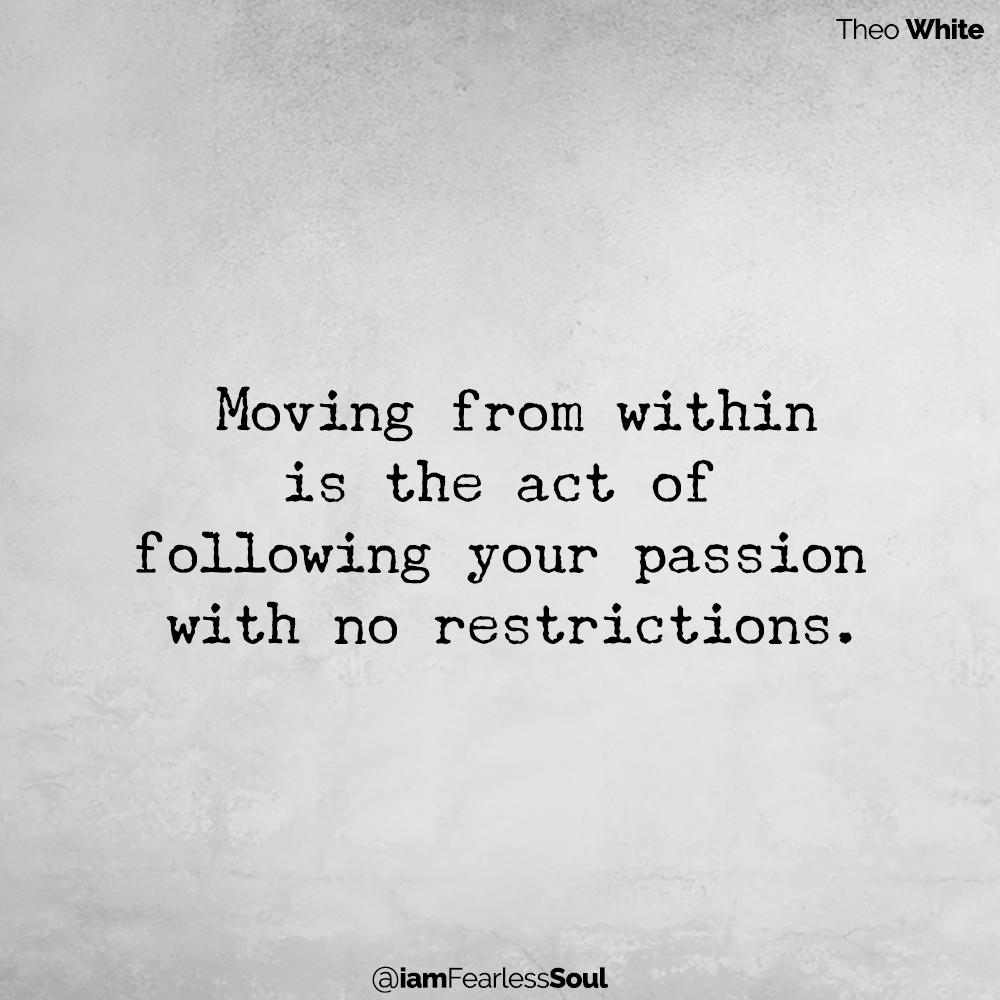 Inspired Action: A Key Factor for Moving from Within

Inspired action is action that feels effortless and joyous and brings no stress nor the tendency to force things into happening. Enoch Tan (2005) comments on this theory:

Never try to force things to happen because you are afraid of what will happen if you don’t take a certain action. Instead, choose inspired action that moves you towards what you want and away from what you don’t want.

Acting on your intentions without trying to force things to happen will magnetize your desires by attracting people, places and opportunities into your reality that you never would have even seen if you hadn’t done so.

Inspired action is something that I have been trying to implement in my life on a daily basis. I’ve noticed that once I start moving and taking action from within, I start enjoying myself more, with less conflicts and less unnecessary worries. I have a lot more energy when I do things, become more motivated, and start enjoying life for what it has to offer. The law of attraction helped me discover inspired action. 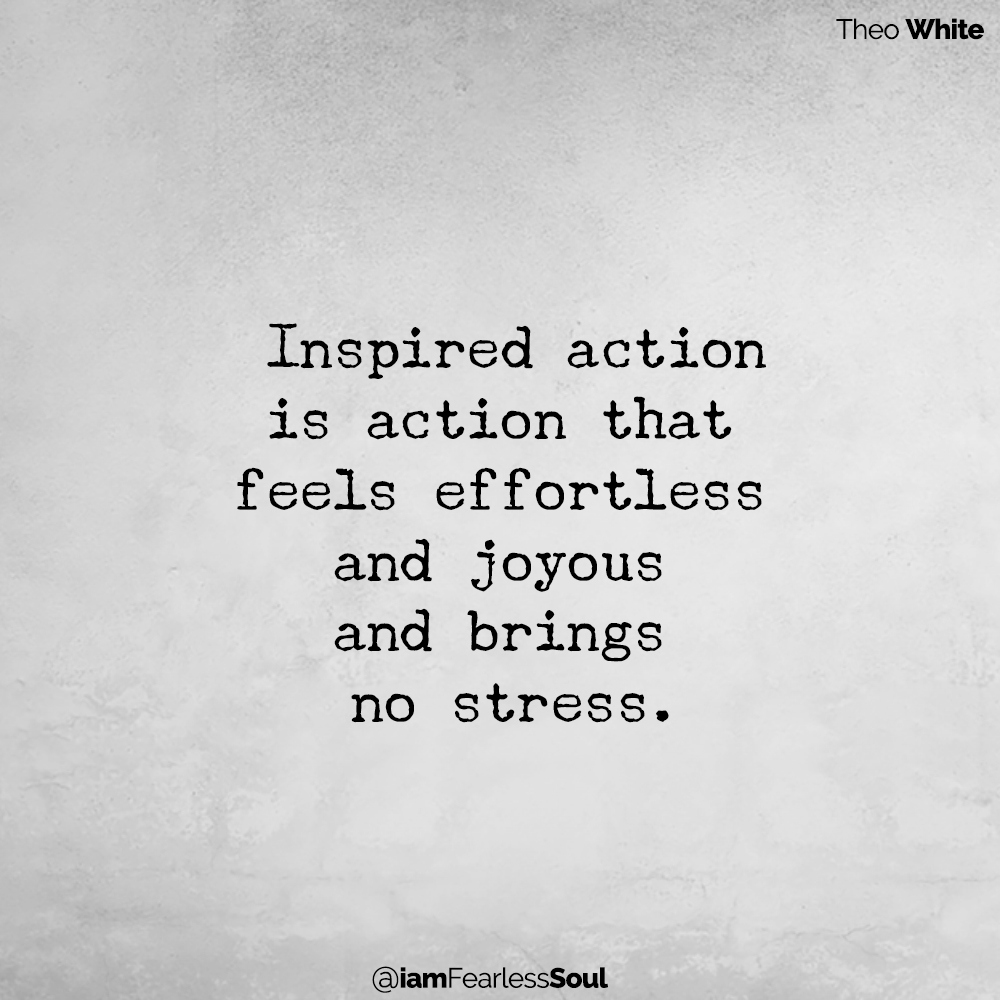 Rhonda Byrne | Moving From Within

Known for being the author of the New Thought Books, The Secret, and its sequel The Power, made an incredible statement on action. In her book, The Secret she said:

Letting go and just moving with the flow of things is the essence of that message.

Trying to force things to happen can be irritating, unmotivating, and tiring.

Basically, trying to force things to happen can lead someone to not partake in a specific action. It is better to just feel free and feel wonderful during an activity.

Taking inspired action is the essence of moving from within.

Take a look at the most successful people in the world today. Those who are extremely successful in any area of life are those who took action from within themselves, letting their hearts guide them to success.

Kobe Bryant | Moving From Within

Let’s look at an athlete, for example: Kobe Bryant,

He brought an x factor to the game. In his prime, he was completely unstoppable and was a pain for teams who tried everything to stop him. But that was not the only thing that made him memorable. The work he put in behind the scenes, was what made him great. His work ethic was insane. His routines consisted of the following:

Even in high school he would show up for practice at 5 a.m. and leave at 7 a.m. His work ethic was one of legend.

But interestingly, a lot of people see this as extremely hard work which involves a lot of effort 24/7. That may have been what it looked like, but honestly, that was not the point whatsoever.

Kobe Bryant a.k.a. Black Mamba didn’t see it as hard work but something that he truly loved. It was his passion that led him. He did not have to force anything when it came to practice because his passion led his actions.

Bill Gates | Moving From Within

Another successful person of note to consider is Bill Gates.

Bill Gates, whose real name is William Henry “Bill” Gates, is widely known for being a successful entrepreneur, philanthropist, and founder of the largest software business, Microsoft.

Until recently he was the richest man in the world for the greater part of the last decade, with a net worth of $91.2 billion.

Now, how do his actions relate to inspired action?

What this is basically saying is that programming computers was his passion and he pursued it all the way towards his successes. He took something that he loved to do and took it to the next level. He turned his love into an outstanding business which made him a very rich man. His passion led him to overwhelming abundancy. 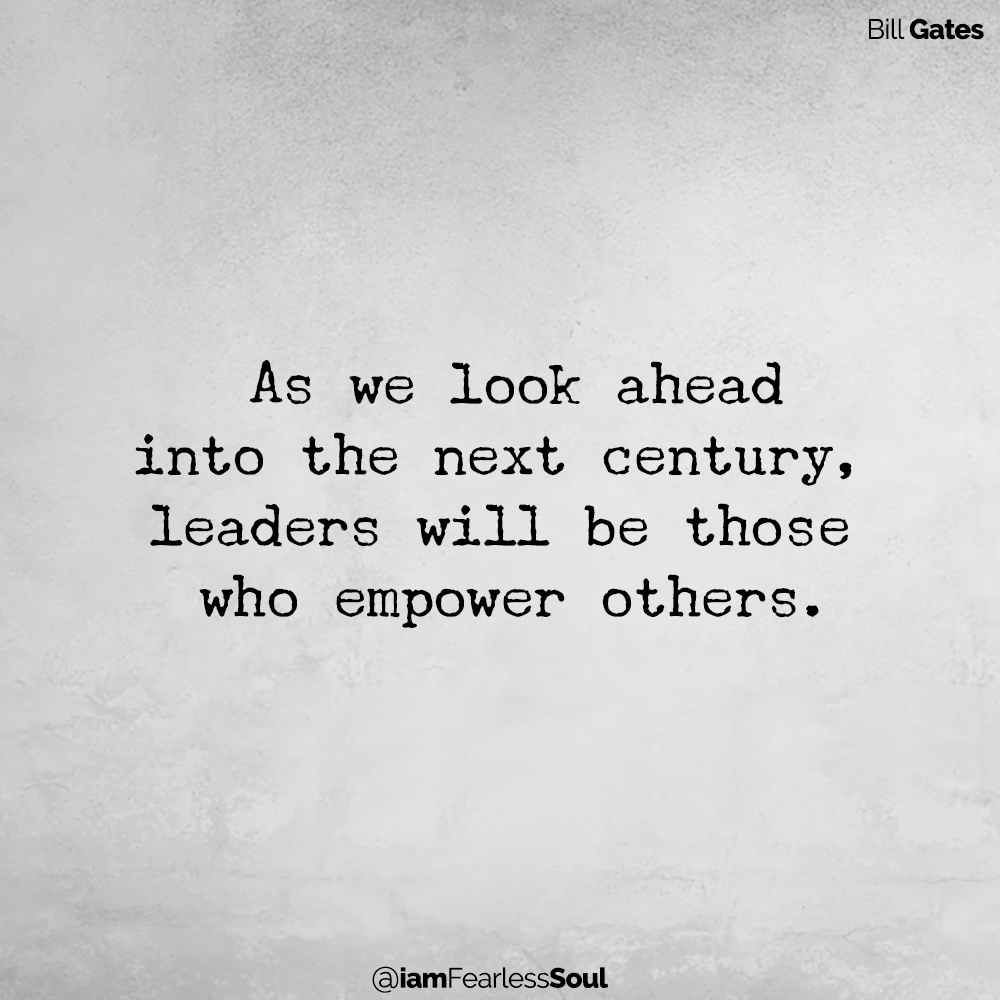 Daymond John | Moving From Within

The last person to consider is Daymond John.

Daymond John is the founder and CEO of a huge successful fashion brand called FUBU.

The brand itself has over $6 billion in product sales, which is something that John appreciates but does not obsess over. His success is due to him following his passion, which led to inspired action.

He started off rough. After making $800 worth of hats and losing that money due to a car crash, losing all of his money and almost losing his house in order to match order requests, he eventually hit it big.

John’s rise was only possible because of his deep passion for his work. “I loved what I was doing,” he says.

John says that every single successful person has that one trait in common: They love what they do.

Inspired action is important and well-needed. These people, along with many other successful people, have learned this and used it in their lives in order to gain prosperity and fulfilment. However, it is not the only thing that aided these people in becoming very successful. There is another factor that played a key role in their lives. And it happens to be the second component that I needed for moving from within. The most successful people in the world knew how to let go.

Detachment: Crucial for Moving from Within

Letting go is extremely crucial for moving from within. Why?

Here is another quote by Enoch Tan:” In order to successfully attract something, you must be detached to the outcome. If you are attached, you project negative emotions of fear, doubt, or craving which actually attracts the opposite of your desire. You are operating from a position of worry, fear and doubt rather than serenity, trust and faith. Of course there are times when negative emotions are meant to be felt and acted upon, but your dominant emotions should be positive ones.”

Letting go, or being detached, allows a person to flow in abundance… in other words, to feel limitless positivity while moving towards what you want. In addition, letting go allows a person to get into the receiving mindset of what they want.

Being detached, letting go, is very important if you want to bring in and receive everything you desire.

In the book The Secret by Rhonda Byrne, there is a three-step process to manifesting your wants and desires.

They are Ask, Believe, and Receive.

The most important step, Receive. This is because if you just simply ask for what you want and believe that you will get it, you will still not attain what it is you really want.

There is a strong correlation between receiving and letting go. When you receive, you begin to feel wonderful about what you want and you feel the way it will feel once it arrives. In other words, you will feel good. And that’s why there is a correlation between letting go and receiving. They both encourage positivity. Letting go and receiving allows you to trust in the God, or Universe, and attract whatever you want towards you.

This is the place where you trust and believe and have faith in the outcome, but don’t worry that it will come about. There is no attachment whatsoever.

Nicole Constante gives her point of view on detachment:

“Letting go is a way of showing our faith. When we are so attached to our desires, our thoughts turn into feelings of dissatisfaction which in turn makes it so hard to practice gratitude, the most important part in the law of attraction. We’ll find it hard to be thankful when our focus is on asking because we believe that we don’t have it yet. And then before we know it, we’re on a rabbit hole of negativity.

Attachment, compared to detachment, is a blockage in getting what you want. Attachment brings fear, worry, and anxiety. There is no positivity when you are attached to outcomes. Attachment only brings negativity. Attachment comes with a very strong urge to control the circumstances. When you’re attached to an outcome, you start to force things. Once you start to force things, then you will start to pressure. Then when you start to put pressure on things, either on yourself or outcomes, then it will never work out in your favor. Therefore, you will not attain what you want.”

Tania Kotsos made the following statement on attachment:

“The instant you attach yourself to a specific person’s actions or words or to a certain outcome, you give your power away to external forces and circumstances. In effect, you give away your power to create your own reality. To be attached to anything or to anyone is to tell yourself that you are somehow incomplete without that person, thing or event in your life. In so doing you fail to see the divine perfection in what is, as it is. Instead, you create within yourself a desperate need to control the process and a sense of doubt as to whether what you want will manifest.” 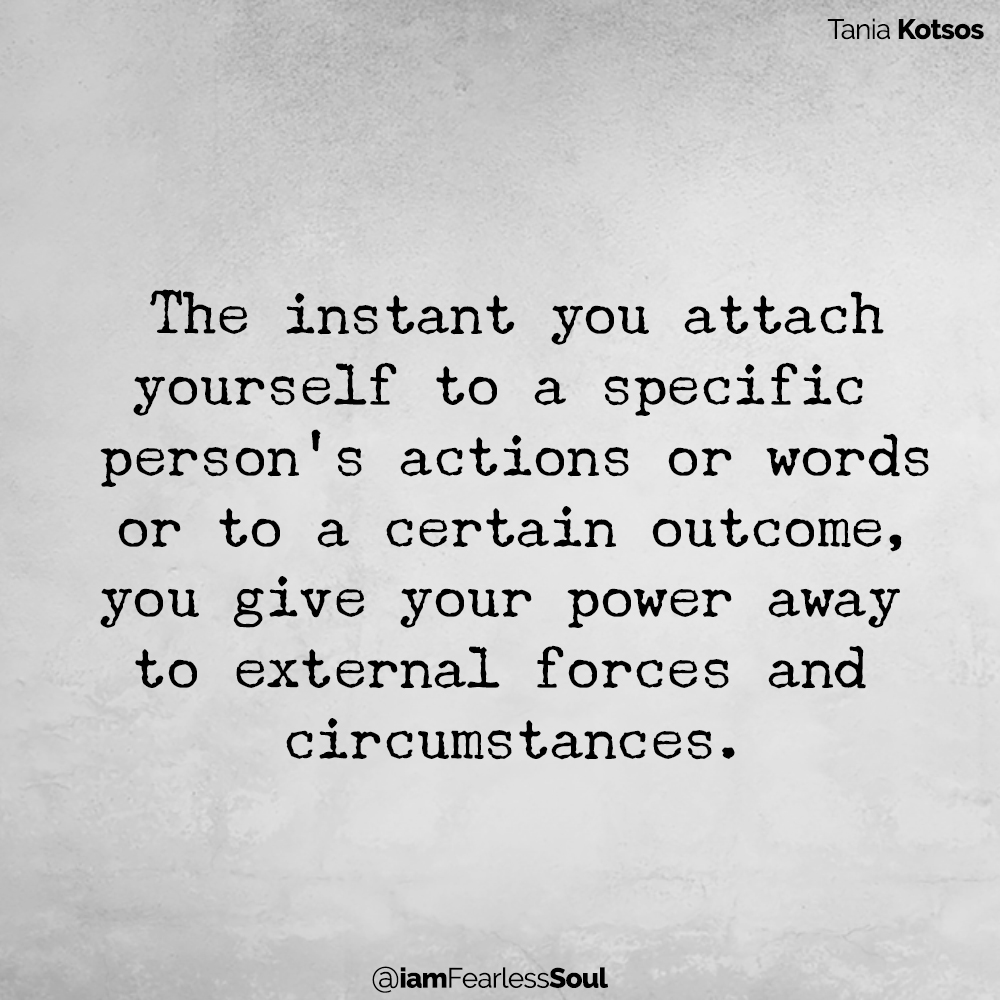 Attachment breeds doubt and as Khalil Gibran said: “Doubt is a pain too lonely to know that faith is his twin brother.”

In addition, she made a statement on detachment:

“Paradoxically, desire keeps your desires away from you because to desire something is to acknowledge its absence in your life. When you become certain of the outcome, then your desire becomes your choice. Your choice is your intention; it is your will. It transforms ‘what could be’ into ‘what is’ and dissolves all doubt. When you will something, you no longer desire it to happen, you choose for it to do so. Remember that we were all given ‘free will.’ You have the free will to create the reality of your choice in accordance with your needs.”

So if you want to effortlessly bring your desires and wants into manifestation, you must be detached. Practicing detachment will definitely better your life. 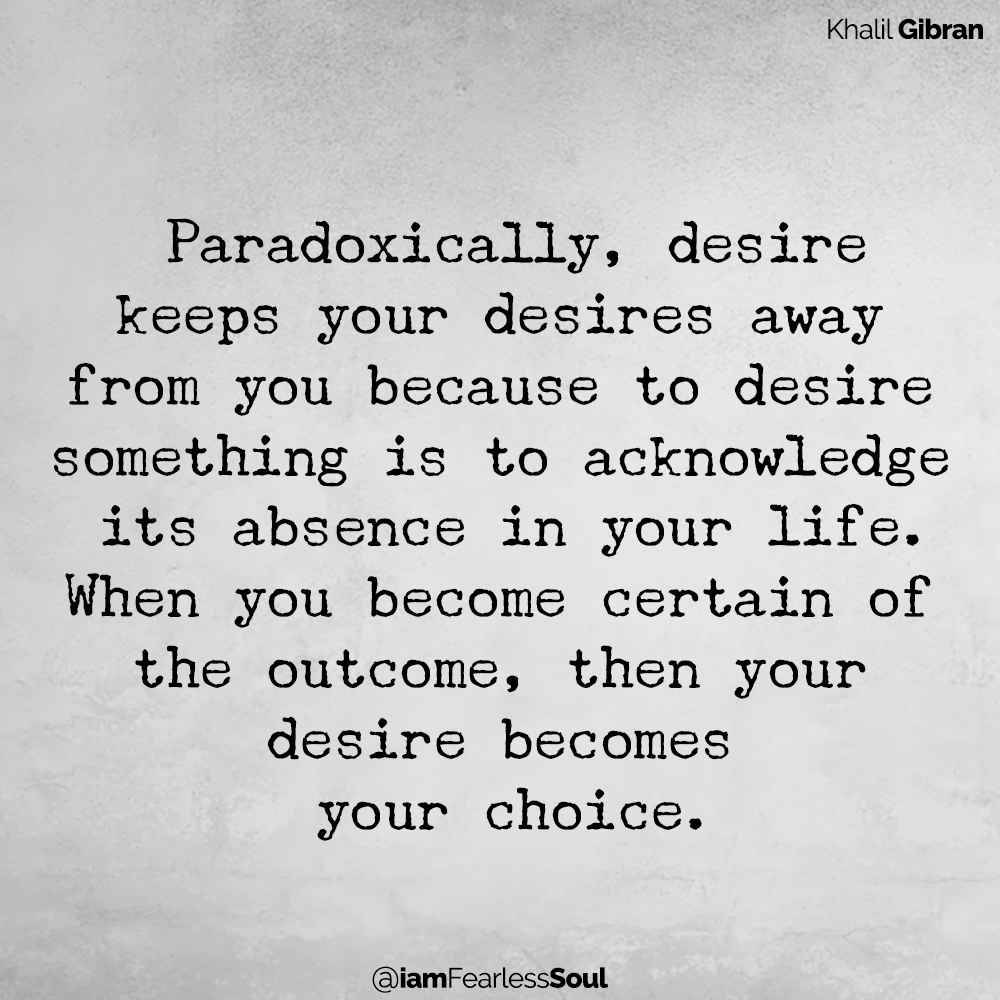 Moving from Within in My Life and Yours

Now, there are a lot of other components that come into play when it comes to getting what you want. Also, I know that people should know those other components in order to get what they want. But personally, I really believe that these two components (inspired action and detachment) need to be learned first if you want to attain anything you desire.

Overall, I believe that a person can receive whatever he or she wants from moving from within.

People should live their lives with joy and receive all of their desires effortlessly.

So I hope this article really touches you. The purpose of this article is to motivate and inspire others to better their lives with limitless positivity, and I hope it will do just that.